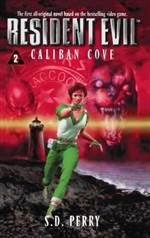 The novel takes place between the events of the Umbrella Conspiracy (Resident Evil 1) and City of the Dead (Resident Evil 2) & Nemesis (Resident Evil 3) and centers around Rebecca Chambers. After a call from Barry about the Umbrella investigation, she heads to his house where she meets David Trapp, strategist and captain of the STARS Exeter branch. David informs Rebecca that another incident has occurred at another Umbrella facility, in Caliban Cove, Maine. Just when Chris and Jill come in, David continues his briefing, which includes a list of people involved in or with the Caliban Cove facility. One of the names Rebecca knows as Nicholas Griffith, a former biochemist who had disappeared after being fired from a university. Umbrella forces, led by STARS members, attack Barry's house. Rebecca takes one out; some others are suspected to be dead. The team takes refuge in Brad "Chickenheart" Vicker's home. After a little talk, Rebecca and David set out and leave on a plane for Exeter.