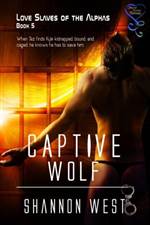 Kyle travels with his bounty hunter cousin, Blayde, to arrest Tarr Bonnet, an exotic, handsome Tygerian national who trades in love slaves all over the galaxies. When Kyle meets him in a sting operation, Tarr turns the tables and takes him captive—he intends to give Kyle to his twin brother Taz, to become his love slave. Taz wants nothing to do with any Lycan, the ones who held him on their planet as a prisoner of war. Yet the second he sees Kyle, drugged, naked and bound in a cage on Tarr’s ship, he knows he has to save him. When Kyle awakens, he sees his mate in Taz and imprints on him immediately, in the way of Lycan wolves. Both men are extremely dominant, but only one can win this struggle between them. Meanwhile, Kyle’s family is planning a rescue, and they don’t care who gets in the way.