City Of The Dead (Resident Evil #3) 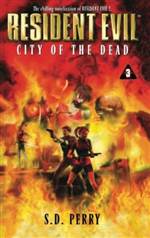 On the front steps of City Hall, Mayor Harris announced in a press conference yesterday afternoon that the City Council will be hiring at least ten new police officers to join the Raccoon police, in response to the continued suspension of the Special Tactics and Rescue Squad (S.T.A.R.S.), in effect since the brutal murders that plagued Raccoon earlier this summer. Joined by Police Chief Brian Irons and all of Raccoon's Council members, Harris assured the gathered citizens and reporters that Raccoon City will once again be a safe community in which to live and work, and that the investigation into the eleven "cannibal" murders and three fatal wild-animal attacks is far from closed.