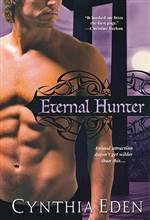 Cynthia Eden delves into the dark realms of the Others, where desires and dangerous games await the unsuspecting in Baton Rouge, Louisiana.

Assistant DA Erin Jerome has a secret. Make that two. One: She’s not entirely human–she’s Other, desperately trying to keep her supernatural strength under wraps. Two: she’s got a killer stalking her–an Other rogue set on “gifting” her bloody corpses, not to mention nights lying awake in terror. Small wonder she’s been having bad luck with men.

But the bounty hunter on her new case isn’t worried about any of that. Jude Donovan is a shapeshifter himself, and the new DA’s midnight hair and addictive scent tell him all he thinks he needs to know: She’s gorgeous, she’s definitely not human, and she’s bringing out the animal in him in a really good way. He might have to track a psychotic Other stalker through half of Louisiana. But he might also get the chance to watch Erin’s wild side come out and play.