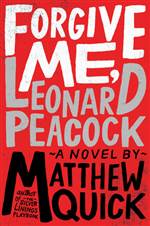 Not to his former best friend, whose torments have driven him to consider committing something tragic and horrific.

Nor to his mum who's moved out and left him to fend form himself. But to his four friends.

Most of the time, Leonard believes he's weird and sad but these friends have made him think that maybe he's not.

He wants to thank them, and bid them farewell.