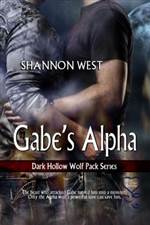 Gabe is a typical young college student until the night he and his mother are attacked by a beast who kills his mother and leaves Gabe for dead. When Gabe discovers the beast who bit him was a werewolf, and shifts into a beast like creature at the full moon, he leaves his home and descends into a nightmare of drugs, alcohol and one night stands. As he’s camping in the woods, preparing for the painful shift to come, he meets a the gorgeous alpha of the Dark Hollow Wolf Pack who tells Gabe he’s trespassing on his territory. Before Gabe knows it, he’s been trussed up, thrown over the man’s shoulder and taken as the mate of the alpha. Gabe embraces his new role as mate to the handsome Zack, but if the alpha thinks the wild young man will settle down, he’s got another think coming.