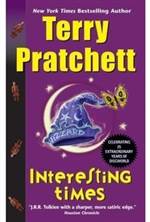 'A foot on the neck is nine points of the law'

There are many who say that the art of diplomacy is an intricate and complex dance. There are others who maintain that it's merely a matter of who carries the biggest stick. The oldest and most inscrutable (not to mention heavily fortified) empire on the Discworld is in turmoil, brought about by the revolutionary treatise What I did on My Holidays. Workers are uniting, with nothing to lose but their water buffaloes; warlords are struggling for power - and what the nation wants, to avoid terrible doom for everyone, is a wizard. Rincewind is not the Disc’s premier wizard – in fact, he can’t even spell ‘wizard’ – but no-one specified whether competence was an issue. And they do have a very big stick…