Memnoch the Devil (The Vampire Chronicles #5) 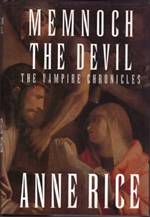 Memnoch the Devil (The Vampire Chronicles #5)

The fifth volume of Rice's Vampire Chronicles is one of her most controversial books. The tale begins in New York, where Lestat, the coolest of Rice's vampire heroes, is stalking a big-time cocaine dealer and religious-art smuggler--this guy should get it in the neck. Lestat is also growing fascinated with the dealer's lovely daughter, a TV evangelist who's not a fraud. Lestat is also being stalked himself, by some shadowy guy who turns out to be Memnoch, the devil, who spirits him away. From here on, the book might have been called Interview with the Devil (by a Vampire). It's a rousing story interrupted by a long debate with the devil. Memnoch isn't the devil as ordinarily conceived: he got the boot from God because he objected to God's heartless indifference to human misery. Memnoch takes Lestat to heaven, hell, and throughout history.