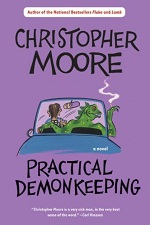 Travis was born in 1900, yet he has not aged since 1919, because he accidentally called up a demon from hell named Catch as his servant, presumably forever. Ever since then, Travis has been trying to get rid of Catch, but is unable to do so because he has lost the repository of the necessary incantations. He traces their whereabouts to a fictional town called Pine Cove, along Big Sur coast, where he thinks the woman he gave them to may be residing. Interactions with the townspeople and with a djinn, who is pursuing Catch, create considerable complications.