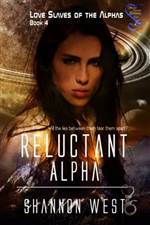 Handsome, young Kai is living a lie. On Scythia, male children are “rejected” so his mother, the queen, hid his true sex all his life. On this planet of Amazon-like women, he’s been able to hide out, but his mother needs to get him safely away from the planet, arranging a marriage to the powerful Lycan alpha. Lucas likes men but is being pressured to find a female and have an heir. Reluctantly, he agrees to meet Princess Kai, and is shocked to discover Kai is no princess, but a handsome young man! Instantly recognizing him as his bloodmate, Lucas is still furious at the deception. He mates with Kai and takes him home, but the lies between them threaten to tear them apart. Kai is still harboring a terrible secret—one that will destroy his world if it ever becomes known.