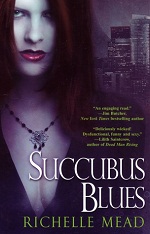 We first meet Georgina Kincaid when she is asked by her friend Hugh the imp to sleep with a virgin who has bargained to give up his soul in exchange for a hot and heavy fantasy encounter with a demoness. So as a favor to her friend she agrees to shape shift into a demonic outfit complete with wings and a tail and sleep with the 34 year old man. We are then told that she is a succubus who takes the life force from men to survive through sex. The better character the man has the more energy she gets from him. The more immoral the man the less energy she gets from him. After sex with the man she goes to her car where she is accosted by a vampire named Duane who tries to force himself on her when she fights back he is angered but when a car driven by it allows her a distraction to get away. She gets a call from her demon boss Jerome who got a call from Duane saying she attacked him and threatened him, which she did in self defense.