The Alpha's Concubine (Love Slaves of the Alphas #2) 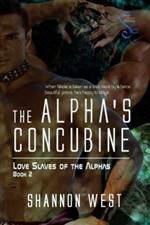 The Alpha's Concubine (Love Slaves of the Alphas #2)

When Nikolai Balenescu and his brother stop by a small, out of the way planet called Jayron to deliver some goods, they have no idea what’s in store for them. Nikolai is immediately attacked by a fierce, gorgeous little prince named Jagger, who takes the Lycan shifter away in chains. Nikolai allows himself to be disarmed because he instantly recognizes the prince as his mate, and he’s willing to play along until he can figure out why his ship was attacked and how he’s now going to save his prince from his fearsome Lycan family who will be coming for him, intent on revenge. Meanwhile, Prince Jagger decides he’ll take the gorgeous Lycan as his love slave and puts him in chains. At first Nikolai is angry, but soon decides that being a love slave to his beautiful mate is an idea he’s only too happy to go along with.