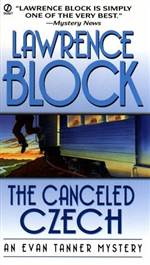 The second adventure of Evan Michael Tanner -- back in print!"The Canceled Czech" finds the sleepless adventurer on a mission to Czechoslovakia to liberate a dying man, who turns out to be a Nazi. For his troubles, he finds himself leaping from a moving train, tangling with an amorous blonde, and playing the role of a neo-Nazi propagandist. Just another typical work day in the life of "the thief who couldn't sleep".