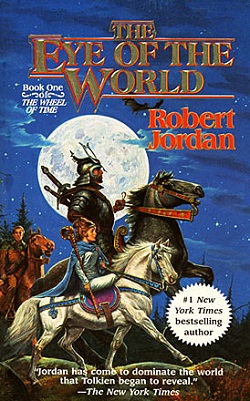 The Wheel of Time turns, and Ages come and pass, leaving memories that become legend. Legend fades to myth, and even myth is long forgotten when the Age that gave it birth comes again. In one Age, called the Third Age by some, an Age yet to come, an Age long past, a wind rose in the Mountains of Mist. The wind was not the beginning. There are neither beginnings nor endings to the turning of the Wheel of Time. But it was a beginning.

Born below the ever cloudcapped peaks that gave the mountains their name, the wind blew east, out across the Sand Hills, once the shore of a great ocean, before the Breaking of the World. Down it flailed into the Two Rivers, into the tangled forest called the Westwood, and beat at two men walking with a cart and horse down the rockstrewn track called the Quarry Road. For all that spring should have come a good month since, the wind carried an icy chill as if it would rather bear snow.

Gusts plastered Rand al'Thor's cloak to his back, whipped the earthcolored wool around his legs, then streamed it out behind him. He wished his coat were heavier, or that he had worn an extra shirt. Half the time when he tried to tug the cloak back around him it caught on the quiver swinging at his hip. Trying to hold the cloak onehanded did not do much good anyway; he had his bow in the other, an arrow nocked and ready to draw.