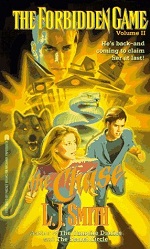 Jenny and her friends are dealing with the aftermath of the events of the first book. No one believes them about their friend's death and the paper house is still missing. When they finally find the paper house it is ripped to shreds and they don't know if Julian was released or not. All is soon reveled and they begin a new deadly game where Jenny's friends are disappearing one by one. This book wasn't nearly as good as the first one. The first half of the book is pretty dull. The action does pick up but it's barley enough to make up for the first half. I did like how we got to know the characters better but I didn't like how little Julian there was. The book kind of struck me as a filler book but I'm sure the last in the series will be much better.