The Gathering Storm (The Wheel of Time #12) 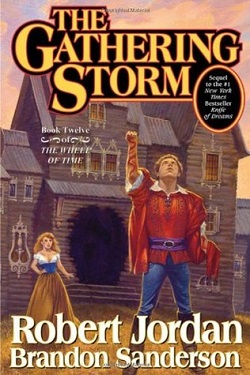 The Gathering Storm (The Wheel of Time #12)

What the Storm Means

Renald Fanwar sat on his porch, warming the sturdy blackoak chair crafted for him by his grandson two years before. He stared northward.

At the black and silver clouds.

He'd never seen their like before. They blanketed the entire horizon to the north, high in the sky. They weren't gray. They were black and silver. Dark, rumbling thunderheads, as dark as a root cellar at midnight. With striking silver light breaking between them, flashes of lightning that gave off no sound.

The air was thick. Thick with the scents of dust and dirt. Of dried leaves and rain that refused to fall. Spring had come. And yet his crops didn't grow. Not a sprout had dared poke through the earth.

He rose slowly from his chair, wood creaking, chair rocking softly behind him, and walked up to the edge of the porch. He chewed on his pipe, though its fire had gone out. He couldn't be bothered to relight it. Those clouds transfixed him. They were so black. Like the smoke of a brushfire, only no brushfire smoke ever rose that high up in the air. And what to make of silver clouds? Bulging between the black ones, like places where polished steel shone through metal crusted with soot.

He rubbed his chin, glancing down at his yard. A small, whitewashed fence contained a patch of grass and shrubs. The shrubs were dead now, every one of them. Hadn't lasted through that winter. He'd need to pull them out soon. And the grass . . . well, the grass was still just winter thatch. Not even any weeds sprouted.