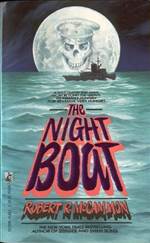 A German submarine is sunk during World War Two. How do you turn this gimmick into a horror novel? Which direction do you go? What's the creep factor? Robert McCammon, who took the premise of vampires in Los Angeles to its natural conclusion by having half the city turned into vampires and unleashed an Allied werewolf loose on a secret Nazi base, can be counted on to accomplish the task. The raising of the Nazi submarine is central to McCammon's story which delivers surprising twists and bloody confrontations. The U-boat was sunk off a Caribbean island, but under circumstances that leave it largely intact until a diver accidentally dislodges an unexploded depth charge which lets the sand-covered sub bob to the surface. This could result in a nice sale to museum. But soon, it's decided the sub would be better off back in the Big Drink. The problem is, see, the crew is not dead, thanks to a voodoo curse.