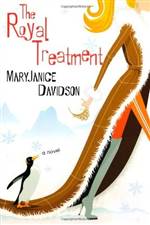 In this delightful and dazzling erotic novel, MaryJanice Davidson creates an alternate contemporary world nearly identical to ours in which Russia never sold the Alaskan territory to the United States. Instead, Alaska has won its independence and established itself as a constitutional monarchy...and now, the King of Alaska badly needs a bride for his son and heir... The country of Alaska is as forbidding as it is beautiful. And the royal family is as rough-around-the-edges as they are coolly civilized. Other royal families may find them shocking, but after all, in this wilderness kingdom, being a crack shot and expert trapper is just as important as knowing your salad fork from your dessert fork. Unfortunately, when the rest of the royals find you mildly savage, marrying off your royal brood can be a royal pain. King Alexander II is desperate. Why, he'd settle for any girl. A commoner. An American, even! Stranded tourist Christina Krabbe is American, and a commoner, but she has zero interest in enduring a royal wedding, producing royal heirs, and becoming Queen of Alaska...until she gets a good look at Prince David. He may be a bit unruly--actually, the words untamed and slightly dangerous come to mind--but Christina's no delicate flower herself. And when His Highness discovers Christina can give as good as she gets, he's Prince Charmed, if not quite charming. But can a wild man Prince and a modern American girl make a life together? And will the palace still be standing when the dust clears?