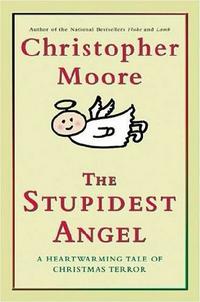 The Stupidest Angel: A Heartwarming Tale of Christmas Terror

Sleepy Pine Cove, Calif., is abuzz with Christmas spirit, but Lena Marquez is fed up with her despicable ex-husband, Dale Pearson. On his way home from playing Santa Claus at the local lodge, Dale spies sneaky Lena uprooting his Monterey pines; he pulls a gun on her, she lashes out with a shovel and-oops!-kills him. Seven-year-old Josh Barker, thinking he's just seen the murder of Santa, prays for a miracle to save Christmas. To Lena's rescue comes Tucker Case, a slimy, reformed Casanova and DEA pilot, who gives her an alibi and sweeps her off her feet. The marijuana-cultivating town constable, Theo Crowe, suspects foul play, but Tucker intervenes with a blackmail scheme to keep the crime buried.