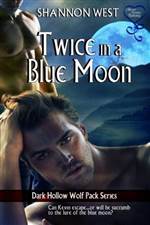 When Detective Kevin Bryson’s partner, Tucker, disappears into the mountains of Tennessee with only a phone call telling Kevin not to worry about him, Kevin can’t leave it alone. For one thing, he’s been in love with the handsome Tucker for years, and for another, he doesn’t trust the man Tucker left with—a handsome man named Gavin. Deciding to go to Tennessee to look for him, Kevin’s surprised when Tucker shows up at his hotel, with another of the men. Suspecting a dangerous cult, Kevin goes with them to their remote mountain lodge. Once he arrives, he’s told he can’t leave. Stripped naked and held captive in the lodge, Kevin finds out just who what this strange “cult” is all about, and he finds himself falling in love against his will. Can he escape and save his friend, or will he succumb to the lure of the blue moon?