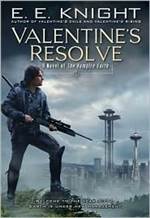 After three years of exile from humanity's war against the Kurians, David Valentine returns to battle. The Lifeweavers, Earth's allies in the conflict, have all but vanished, and without them mankind cannot possibly stand against their alien enemies.

Many of the Lightweavers are held captive by a Kurian overlord. To free them, Valentine must convince the Marshal, a legendary resistance fighter with a grudge against the Kurians, to join his cause. But the Marshal is something of a dictator himself, ruling over his men with an iron fist-and giving Valentine a new enemy to fight.