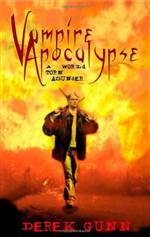 The war is over and the Vampires have won. The drying up of the world's oil resources leads to the fabled End of Days. Technology stagnates and communities grow ever more insular. With communication between cities lost and attention turned inward, the vampires rise from the shadows where they have survived for centuries and sweep across the globe.

By the time word spreads it is far too late and Vampires enslave humanity and keep them in walled cities to breed. The Vampires are masters of the darkness but maintain control by day through the use of Thralls - humans who have been bitten but have not yet crossed over, and whose inhuman lusts make daylight as terrifying as night.

In the midst of chaos, a small band of rebels lead a terrified existence, but their survival is threatened by the Vampire's new scanning procedures. Peter Harris is an ordinary man. Young and reckless, he is frustrated with the group's stagnation and pushes for one more daring mission. His recklessness has exposed the group - but it has also increased the size of their community. Now, as circumstances force them to take the offensive, and accompanied by a small group of professional Vampire assassins, John will make one last stand for humanity's survival in the Vampire Apocalypse.