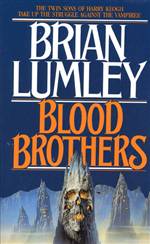 The vampires have been vanquished! Harry Keogh and the armies of the dead have destroyed the evil that once plagued the world. Nathan and Nestor, secret twin sons of the Necroscope and a proud gypsy woman, were children when their father, his humanity poisoned by his fearsome struggles, sacrificed himself to save mankind.

Yet there are vampires still, vampires crueler and stranger than any the Necroscope had faced. When these new, merciless killers swoop out of the sky, Nathan and Nestor are men--but they have few of Harry Keogh's miraculous powers.

Torn from each other by battle, the sons of the Necroscope journey across the vampire world, exploring its mysteries, each seeking the powerful, terrible vampires, his missing brother...and the woman they both love!