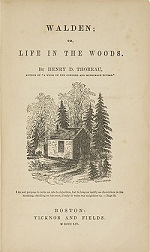 Walden (first published as Walden; or, Life in the Woods) by Henry David Thoreau is one of the best-known non-fiction books written by an American. Published in 1854, it details Thoreau's sojourn in a cabin near Walden Pond, amidst woodland owned by his friend and mentor Ralph Waldo Emerson, near Concord, Massachusetts. Thoreau lived at Walden for two years, two months, and two days, but Walden was written so that the stay appears to be a year, with expressed seasonal divisions. Thoreau did not intend to live as a hermit, for he received visitors and returned their visits. Instead, he hoped to isolate himself from society in order to gain a more objective understanding of it. Simplicity and self-reliance were Thoreau's other goals, and the whole project was inspired by Transcendentalist philosophy. However the house was not in wilderness but at the edge of town, 1.5 miles (2.4 km) from his family home, and his mother cooked him meals and cleaned the house.