While It Lasts (Sea Breeze #3) 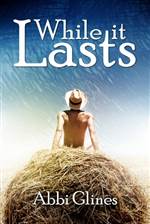 While It Lasts (Sea Breeze #3)

Maybe driving home after a few (or more) shots of tequila had been a bad idea, but hell, he did it all the time. The cops had to have been freaking bored to have pulled him over. He wasn’t even swerving! That’s Cage York’s story and he’s sticking to it.

Unfortunately, his baseball coach isn’t buying it. Cage has a free ride to the local junior college for baseball -- or he did, until he’d gotten a DUI. Now, Cage has to decide: does he drop out and give up his dream of getting noticed by a college in the SEC, and possibly making it into the Major Leagues -- or does he give in to his coach’s demands and spend his summer baling hay?

Eva Brooks planned out her life step by step when she was eight years old. Not once over the years had she lost sight of her goals. Josh Beasley, her next door neighbor, had been the center of those goals. He’d been her first boyfriend at seven, her first kiss at ten, her first date at fifteen, and her first tragedy at eighteen. The moment she’d received the phone call from Josh’s mother saying he’d been killed along with four other soldiers just north of Baghdad, Eva’s carefully planned life imploded in the worst way possible.

Cage isn’t real happy with his closet-sized bedroom in the back of a foul smelling barn, or his daily interactions with cows, but he knows that if he doesn’t make his coach happy then he can kiss his scholarship goodbye. Only a sick and twisted man would decide his punishment was to be working on a farm all summer. No hot babes in bikinis waiting to meet a Southern boy to make her vacation complete. Just him and the damned cows.

Oh -- and an uptight, snarky brunette with the biggest blue eyes he’s every seen. But she doesn’t count, because as hard as he’s tried to charm her out of her panties - he’s pretty sure she’d rather see him hung from the rafters than let him get a taste of her pretty little lips.