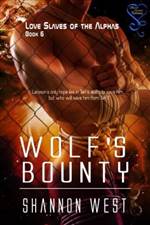 Larsson Balenescu is trying hard to get over the fact that his fated mate is not only a Tygerian, and one of the Alliance’s most bitter enemies, but also the fact that he’s Tarr Bonnet, one of the worst pirates and sex slave traffickers in the known galaxies. When Larsson discovers that Tarr has put a price on his head, he’s furious, and vows never to mate with the man, no matter how painful it is for him to stay away from him. Soon he’s captured by Tarr’s men and taken to his ship where Tarr sets out to claim him as his love slave. An accident en route forces them to crash on a strange moon, where Larsson is captured by the inhabitants. His only hope lies in Tarr’s ability to save him. But who will save him from Tarr?