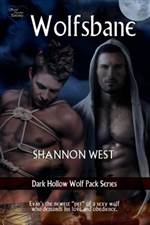 Evan Grant, a security guard in the Hunters’ prison, is anxious to prove himself with the group. A new prisoner arrives, and Evan feels an immediate attraction. The shifter is Brett, the most handsome man Evan’s ever seen, and the tortures the Hunters have put him through touch Evan’s heart. Bringing him pain medicine and food, he makes a strong connection with the handsome shifter. His attraction is overwhelming, and it becomes even more difficult when the Hunters’ scientists ask him to volunteer to mate with the shifter so they can study the bloodmatch. He agrees to the experiment only after the scientists promise nothing can go wrong, but after Evan mates with Brett, he overpowers the guards and escapes, taking Evan with him. It doesn’t take long to discover Evan’s the newest “pet” of the Mountain Wolf Pack, and Brett is his new master.